fmcgmccllc
Grosse Pointe Woods, Michigan, United States
Love to laugh and if automotive can't make you laugh nothing can.

The Renovation From Hell 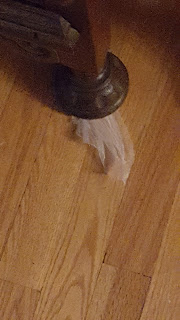 This is called a piece of plastic the crackhead drywall asshats left under the parlor cabinet by mistake. I say by mistake because those idiots were not supposed to move that cabinet without permission, tried to hide the fact that they did and got caught. I do like the word parlor.

So when I found all the fuck ups from the jerkwads I was just a little bit miffed. They also cracked a picture frame and chipped a vase. I sent pictures and an email describing the mess to Big Daddy. I sent them there because I am no longer speaking with the contractors. I am afraid if I speak to them I will be compelled to tell them just how worthless they are as workers, construction people, and human beings. I will also need to tell them they are the worst liars I have ever met. Not that the lies they tell are enormous, which of course they are, but that they are really bad at telling the lies. These people are so bad that if they told me I looked nice I would call the funeral home for an appointment.

So we hired these cretins to finish off the attic so we could move my mom into the house. This is because my SIL left her high and dry, also known as kicking her to the curb, and now my brother is living in her summer home and he is homeless, jobless and in every addiction program known to man. The job began the end of March and now, here, the almost middle of June has not completed the first inspections. And this has little to do with the fact the measurements were all wrong, the tub was the wrong size, the project manager is no longer allowed on site, the drywall sat out in the rain, the drywall could not be delivered, the entire floorplan changed overnight and Big Daddy had to take the final window measurements. Nope, it is all because they can't find their ass with both hands.

Well my anxiety level is higher than my head, my mom is stuck in Florida and needs a breast biopsy, she is covered with an ugly rash the doctors can't figure out and just today the head whacko said I do not need a sub-floor on the plank floor he ruined. Big Daddy is leaving me with these idiots to go to Mexico and the cat and I are not happy. 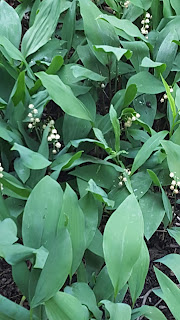 Last of the Lily of the Valley.
Posted by fmcgmccllc at 2:14 PM